HOW IT ALL BEGAN

In 2009 architect Wendy Taylor the designer of the Central District Exhibit at the Sydney Royal Easter Show contacted me after seeing Art4Agriculture's Picasso Cows program.

Wendy had long felt that the District Exhibits should encourage designers to challenge themselves to reinvent and create new and unique displays. Even on the phone, I could hear her enthusiasm and bright mind ticking over. I knew I had to meet this woman.

When we did connect I informed Wendy I had handed over the management of dairy industry focused Picasso Cows to Dairy Australia and was rolling out a new program, it wasn't long until we talked about our new school-based program that would showcase other food and fibre industries The Archibull Prize. Wendy was just as excited about the "Archies" as I was—she felt strongly that the District Exhibits echo its ideals, promoting sustainable and local agriculture.

So began one of the most inspiring journeys I have walked (or run, in the case of Wendy), watching this woman's vision come to life onto the unique canvas that is the iconic Central District Exhibit.

In 2010 Wendy and her team launched The Archibull Prize. The display used the recognisable figure of the cow, reinvented into everyday items of produce utilising art and design to connect concept and community for the promotion of agriculture. The display featured 10 cows, each representing an area of agriculture, as defined by the District Exhibit competition: Dairy Produce, Foods, Wines, Preserves, Fruits, Vegetables, Cucurbits, Grain, Stock Fodders and Wool.

The ten cows stand within a profusion of agricultural products - with diversity and abundance for all to see. The front and back walls of the display are simplified to create balance and maintain the emphasis on agriculture. The sculptural and dynamic impact of the cows, with the uniqueness of concept, draws attention to the District Exhibits and the Archibull Prize program, leaving a lasting impression on the viewer. See it come to life HERE. 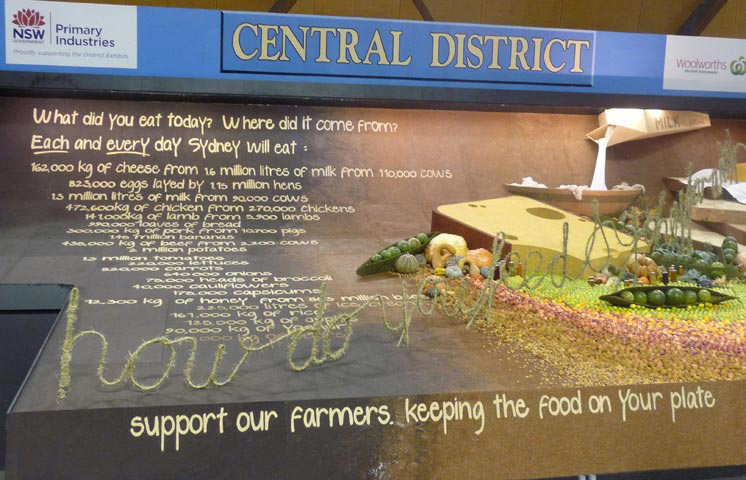 Again in 2011 the Central District Display showcased The Archibull Prize and its ethos. This display was inspired by a visit to Clover Hill Dairies, where Wendy and her family were amazed at the quantity of milk that a single farm supplied to Sydney each and every day.

This sparked an idea and started a discussion. What does it take to feed Sydney for one single day?

We decided to research and uncover this quantity of food, to highlight the importance of the rural sector. To our amazement, these figures did not exist; there were some industries that weren't able to supply any figures of any kind. The quantities are staggering and they only hint at the full story. It's staggering enough to discover you need 90,000 cows to produce 1.3 million litres of milk that Sydney consumes every day, but then how much land do you need for those cows? How many people to run the farm? How much feed for the stock?

These are only a handful of questions and they are only for one area of agriculture. The drive behind this display is to start a discussion. If we can get people talking, thinking and appreciating their reliance on the rural sector, then the display has done its job.

Australian farmers feed and clothe 60 million people. If they were doctors or nurses or pharmacists or ambulance officers or firemen there would be a moment in most people's lives when they would be reminded just how important those professions are.

Farmers, at less than 1 per cent of the Australian population, are almost invisible. With food in abundance in this country, there is little opportunity to remind Australians just how important our farmers are.

Wendy Taylor and the Central District Exhibit, I salute you - for fourteen days and fourteen nights you are reminding Sydney and showing visitors just how important our farmers are.  Let's hope this starts a very long conversation and a new appreciation for the Australian farmers who produce our food and fibre.

So just what does it take to feed Sydney for a day?

Now in its fifth year the Archies, as they are affectionately known, have reached over 100,000 students and chalked up some impressive successes. The 2014 Grand Champion Archibull Prize winner “Ni Cow”, which was designed by students from Hurlstone Agricultural High School in Glenfield, New South Wales, now resides in the office of Hon Niall Blair, the NSW Minister for Primary Industries, Lands and Water.